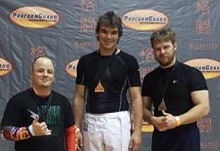 The one standing in the middle – is my  boy. Just 4 years ago, doctors advised he would need a walker or at least a cane to get around following a nasty motorcycle accident that dislocated his foot off the bottom of his leg.

The really as thing is that my son had just won tickets to a Braves game for that night on a radio station. Normally he would NEVER get on the Atlanta connector with the motorcycle. But he was so excited to take his dad to the Braves game that he thought that just this one time … well … you know.

As a man of integrity, sitting on the side of the road with his foot bent 90 degrees to the side … he calls me – his mom – to say he is okay and pass the phone to the emergency worker. I recall asking the HERO worker if he son was okay and he said, “he is okay but he has a broken ankle”. Being the consummate positive thinker I asked “how do you know” not realizing the severity of the injury.

I rushed to the ER. As I stood next to his bed, I gripped the railing, hoping to high heavens that I would not pass out. That was a sure fire way to get kicked out of the ER. And I was NOT leaving my son.

I remember thinking how wrong it was for me to see his bones on the outside … when I had made him so carefully on the inside. I had loved, nursed, home birthed, and protected him. My head reeled from the view of bones and blood – but I gripped the railing harder and made my body go stiff; if I did pass out, I would still be standing. Nothing was going to take me away from my boy.

When he was little, we totally nurtured him. But we quickly learned that Attachment Parenting only begins with the cuddling, loving, and nurturing. What it took to raise my child to become the winner in this picture – I am not talking about being a tournament winner – was a great deal of hard work, focus, and determination.

The nurturing phase of attachment parenting is a great start! The next phase of parenting involves teaching children to live by integrity, inspiration, and purpose. We taught our children about ethics, compassion, and humanity. These vital lessons are transmitted through strong family culture, the ethical behavior of parents, and clear rules and boundaries to help children realize when they are in the right and exactly when they are not.

Watching my son compete in that mixed martial event that day created a loop in time. In one moment, I was gripping the bar of his hospital bed, willing myself not to pass out no matter what I saw next. In the next moment, I am watching him compete for his second gold medal of the tournament – the scars from the surgery peeking out from below his uniform.

I want to share with other parents just what it took to move beyond that initial nurturing phase of the Attachment Parenting process. Oh, the nurturing is great. It feels wonderful. And seems to make little ones so very happy. But that is only the start.

What must come next is equally critical to raising an awesome and outstanding human being. Giving children only the nurturing and happy-making part of Attachment Parenting is to cause pain, suffering, and discontent.

As our children grew from infancy, we quickly realized a self-correction was needed. Infants must learn to self-soothe and self-regulate. The more healthy opportunity we provided our children to master their own process, the brighter, more effective, and more excited they became. We set aside our initial belief about sensitive, gentle, and nurturing parenting. We moved on to the Second Phase of Attachment Parenting.

No longer did we try to protect them from sadness. Clearly, our little ones needed to learn about to regulate their own sadness. It began with little steps until each of our children became effective, powerful, and productive humans. As hard as it is for nurturing parents to admit, children need the chance to work through strife in order to become resilient. It is the way to prepare children for what real life will dish up later on.

I will admit that sensitive parenting does start out with lots of love and feel-good cuddling. But what it takes to raise those precious little ones into powerful and well-adjusted adults takes oh, so much more. Raising awesome kids takes integrity, focus, and grit. 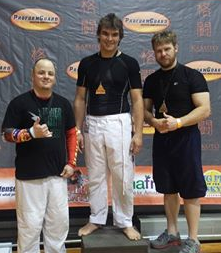 And that is what makes my son a winner. Not because he won his competition. Because he competed at all.

While overcoming a horrible motorcycle accident is an incredible feat, my son’s accomplishments go beyond. If you see him cuddle my grandchildren … if you see him care for a sick animal … if you see him advocate for a senior citizen in need … you will really get to see the full package of real Attachment Parenting at its very best. And it is a lovely sight to see.   – Darleen Claire

Darleen Claire is a mother, grandmother, special education teacher, and clinical mental health counselor with a commitment to brain-based and effective parenting and child rearing practices.